Stoner rock is certainly having its moment in the sun lately with labels like Ripple Music, Easy Rider and of course Good To Die Records leading the charge. Sandrider are Good To Die signees and belong to a larger movement than just young bands trying to make good. They are a band who have clearly poured hours of time and endless energy into […]

They say weed is a gateway to heavier things. No one has proven this to be true quite like the members of Sleep. Throughout the 1990s, the Bay Area trio took a simple idea—slow, bluesy metal in the spirit of Black Sabbath, that recasts smoking pot as a ceremonial ritual worthy of hour-long suites—and executed […] 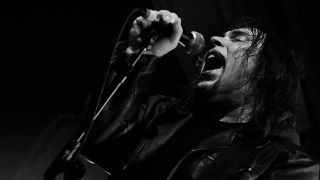 From its birth in the post-psychedelic dystopia of late 60s Birmingham to the sun-baked California deserts and beaches, stoner rock is a scene with many stories to tell.

It begins, as do many tales of heavy music, with Black Sabbath – where the isolation and bleak social surroundings of the Midlands forced the disheartened youth into the arms of a experimental scene rife with musical abandon and liberal drug use. The flower power generation never made it far as Aston but a bastardised translation of their free-thinking ethos did. And so, to match the daily drudgery of life in Birmingham, the music they created echoed with vastly down-tuned guitars and slow, repetitive riffing. Sabbath weren’t alone, as over the Atlantic, Blue Cheer had already been scaring hippies with their feedback marathons and nightmarish covers of Eddie Cochran hits.

The tides were turning and the optimistic, free-love generations were gradually being overshadowed by this new wave of dense music that we’d later know and love as ‘heavy metal’.

Just as the musical youth at that time needed a saviour, it would be another 20 years until that cry would be heard again. This time, as a backlash to what the late 70s and early 80s had transformed heavy metal and hard rock into. Just ask Master Of Reality Chris Goss, longtime Kyuss collaborator and godfather of the so-called ‘desert scene’. “In the 80s, things went awry with heavy music,” he says. “Metal in the 80s was very staccato and very anal retentive. It didn’t swing or flow like when Sabbath was rolling along like a thunderstorm moving in. It became a joke; almost like championship wrestling with loads of fake blood – which you can probably blame Kiss for. I lost faith in a lot of it. I wasn’t intrigued by it and I had to go to other sources to find that kind of intelligence and movement I was looking for.”

It was lucky for Goss then that at the time his wife Cynthia, who was working at BMI, was handed a tape from a new band called Sons Of Kyuss. Impressed by what they had heard, they made a bee-line to the band’s debut show.

“It was at a bar called The Gaslight, down a back alley in Hollywood, where Kyuss played their first show. There were five to 10 people there and I was blown out the door by it. At the time in 1990 they were tuned down lower than anyone, even lower than Black Sabbath. The strings were so loose and tuned down so low, they were flapping out of tune in a great way which created this bulldozer of a soundwave.”

“They were isolated in the same way that Sabbath were in Birmingham, the desert was its own enclave,” says Goss. “But you come to find that Sabbath wasn’t really their muse, it was the desert itself. There’s something gritty and wide open about Kyuss, isolation creates its own story.”

Kyuss’s two milestone albums in Blues For The Red Sun and Welcome To Sky Valley set the template for the stoner sound, but musically, it’s indebted to more bands than just Ozzy and co’s epic sludge. Upon Kyuss’s split, each member would take what they had started and forge out in completely different directions. California fuzz commanders Fu Manchu (which featured drummer Brant Bjork) would embrace beach and skate culture, combining the brightly coloured Americana of The Beach Boys with the gritty distortion of Deep Purple. Regal Begal from their album In Search Of… is all the proof you need – it has become as synonymous to stoner rock as anything from Bjork’s former band.

Vocalist John Garcia formed the closest incarnations to the Kyuss formula in his bands Slo Burn and Unida. Both bands would revolve heavily around Garcia’s Danzig-esque powerhouse vocals, intertwining them with the kind of sludgey groove reminiscent of St. Vitus or Down’s early work. Guitarist Josh Homme spent a short stint on tour with the Screaming Trees but soon after laid the foundations for his band Gamma Ray. After some legal threats from a certain German power metal group however, he changed the band’s name to Queens Of The Stone Age. These initial recording line-ups included members of Soundgarden, Screaming Trees and Monster Magnet, adding a grungy element to the classic rock nature of their music

Despite seeming evidence to the contrary, it wasn’t just Kyuss alumni holding the monopoly on this burgeoning scene. Monster Magnet, under the psychedelic stewardship of Dave Wyndorf took it into space, creating giant Hawkwind-esque future grooves. “I guess it has something to do with everyone being into weed,” chuckled Wyndorf when asked to try to define the stoner sound. “But musically there’s so much variety. Are we the same as Kyuss? Are they like Fu Manchu? Probably not. I always thought someone in Holland invented the term anyway.”

The scene went supernova and no matter in which direction its particles flew, all the bands would orbit the same ideals of riff-worship, volume and pure mental escapism. Maryland freestylers Clutch would later get tarred with the stoner brush as their numerous excursions into the musical cosmos with their rich blend of funk, hardcore punk and southern boogie earned them kudos within the stoner fraternity. Their ferocious live jam marathons and existential lyrics made them easy targets for the category but also showed how far the scene was expanding, not just in influence but in style.

But the stoner scene is not limited to the US. Latterly, the UK would get involved. Without the arid deserts and expansive beaches for inspiration, how would Britain adapt to the return of the reformed monster it birthed so many years before? Well the UK did what it did best and dragged it kicking and screaming back into the misanthropy from which it was created.

“None of us over here could write honest songs about drag racing beach buggies along a Californian highway like Fu Manchu do,” explains Orange Goblin frontman Ben Ward. “And no American band could honestly capture the misery, despair and pure fucking hatred of Little Britain like Electric Wizard or Iron Monkey do! I think this is why UK bands were so averse to being labeled ‘stoner’ or ‘desert-rock’. To us it has always just been metal or doom. There was a time in the late 90s when bands from places like northern Norway were proclaiming to be desert rock, despite living in 24-hour darkness! It all got a bit silly.”

The global attraction of this music was becoming increasingly apparent as scenes began to burgeon from unlikely sources; the Netherlands and Scandinavia being the most prolific with bands like Dozer, El Caco and Spiritual Beggars making waves. And while the bands of the cold north lacked the beaches, they had the grim desolation of metal’s forefathers to look to, as is often apparent in a lot of Scandinavian bands’ tendency to stay closer to hard rock influences such as Purple, Atomic Rooster and Zeppelin.

Globally, the metal and rock scenes were caught between the decline of grunge and the beginnings of nu metal and the followers of stoner/desert once again found themselves shunned out of the spotlight and back into the shadows. And they couldn’t be happier. “There are so many variations on the Sabbath influence and that is what keeps it exciting and evolving,” says Ward. “Some bands are now pushing the limits of how heavy or how slow music can get. There is only so far you can downtune and bands like SunnO))) and Yob have taken that to extremes. Other bands are regressing with recording techniques, trying to return to the analogue age to record how Sabbath and Blue Cheer did it. Whatever happens, it’s never gonna rise out of the underground and become mainstream and do you know what, I like that because I feel that this is our music and we like to be outsiders.”